Start practicing with these TOEFL Listening exercises.
Increase your score with these powerful TOEFL questions.

The TOEFL Listening section is no walk in the park.

That’s why we’ve created our very own TST Prep TOEFL Listening Practice Questions that our students can access for free!

Each answer also comes with a detailed explanation to help you understand why each response is correct. That’s something you won’t find anywhere else.

So what makes our TOEFL Listening practice special?

Listen to this TOEFL practice passage transcript below here:

The Sapir-Whorf hypothesis is based on the idea that people experience their world through their language, and that they therefore understand their world through the culture embedded in their language. The hypothesis, which has also been called linguistic relativity, states that language shapes thought. Studies have shown, for instance, that unless people have access to the word ‘ambivalent’ they don’t recognize an experience of uncertainty due to conflicting positive and negative feelings about one issue which is the definition of ambivalent. Essentially, the hypothesis argues, if a person can’t describe the experience, the person is not having the experience.

1. What is the topic of the lecture?

a. If certain words don’t exist in your language, there’s a reason
b. The idea that language affects our experiences
c. How linguistic relativity shapes the way we think
d. You can predict what someone is thinking based on their language

2. Why does the professor talk about the word ‘ambivalent’?

Although C seems correct at first, it is actually not correct because linguistic relativity does not shape the way we think, rather linguistic relativity is the name of the hypothesis that states language shapes the way we think. The main idea is clearly stated in the beginning of the passage and the rest of the passage is an example to build upon the idea.

The key word here in the answer here is to prove. The lecturer is providing an example of linguistic relativity to an extent, but mainly the lecturer is showing proof that linguistic relativity has evidence for it. The key word to listen for in the lecture is studies show, which generally introduces proof for something. “Studies have shown, for instance, that unless people have access to the word ambivalent, they don’t recognize an experience of uncertainty due to conflicting positive and negative feelings about one issue.” 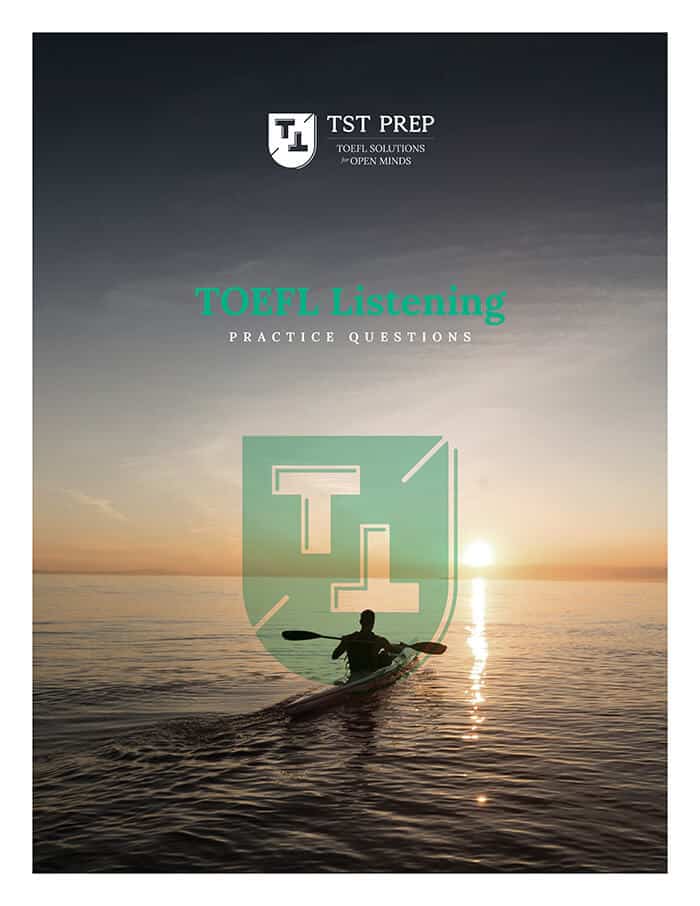 Tired of reading and want to get started already? Your free collection of 100 TOEFL Listening practice questions is available now.

But if you have another minute, I will explain what these passages are and show you exactly how they can help you boost your TOEFL Listening score.

Notice anything different about the passage above?

1. Each lecture is short!
2. There are only two questions!

You may be wondering: “Shouldn’t we be practicing like the real TOEFL?” Sometimes, but not always. We have designed these TOEFL Listening practice questions to help build your listening skills so you can answer questions quickly and correctly.

How do I practice the TOEFL Listening?

With short lecture passages, you won’t feel overwhelmed by so much information. When you focus on a narrow set of content, it’s easier to identify your strengths and weaknesses in listening. If you went to other TOEFL Listening practice sites online, you would make the same mistakes over and over again without understanding why you were wrong.

What you need to know
about the TOEFL Listening

The TOEFL Listening section consists of both campus conversations and academic lectures.

But our TOEFL Listening practice only focuses on academic lectures.

Because academic lectures are more challenging to comprehend than conversations.

If you think about it, a conversation between two people is more interesting than listening to a professor drone on about some academic topic you’re not very interested in.

Still, if you want to practice just like the TOEFL test, you can download our free complete TOEFL test.

Because we want to share with you some tips on how to get the most out of your TOEFL Listening Practice so you can improve your score.

These passages may be short, but that doesn’t mean you get to skip out on taking notes. Students often decide not to take notes because they prefer to rely on their memory for answers. However, the most common type of question in the TOEFL Listening is a detail question, and these are particularly hard to answer if you rely on your memory alone. To learn more, check out our TOEFL Listening Notetaking Guide.

These short listening passages were specifically designed to help you improve your TOEFL Listening skills.

First, let’s consider why these short passages are so helpful. For starters, you don’t have to focus on so much material at once. It’s much easier to sort through small bursts of information.

Secondly, these short listening passages allow you to reflect on your answers. If you don’t understand why A, B, C, or D is correct, how will you be able to choose the correct answer in the future?

An important fact about the TOEFL Listening section is that you can’t jump around to answer questions like in the reading. You can’t go back to an answer you skipped. You must choose an answer then move on to the next question no matter what.

If you want to know how many reading passages are on the TOEFL and how many questions there are in total, you need to remember this:

How many questions are there in the TOEFL Listening?

In the chart below, all of the question types have been laid out and separated based on frequency, common lexical structure, and the question point value.

"There is a table here. Please rotate your phone to landscape in order to see it."
Why does this matter?

If you can recognize the type of question you have to answer, you’ve already won part of the battle. Understanding the question type will give you hints and clues as to what to look for and which responses to eliminate.

If you’re still getting questions wrong, you may have…

When I say practice, I don’t mean just taking practice exam after practice exam. Practice your listening skills in every way possible. Watch shows, listen to podcasts and download music in English. Increased exposure is one of the best remedies for a limited vocabulary.

And, of course, use our complete TOEFL Listening Practice Pack.

It’s one thing to sit down and take a few practice exams, it’s another to feel confident under the pressure of the clock.

On the TOEFL exam, you won’t be able to think about a question for 5 minutes. In reality, you have about 30 seconds to answer each question in the allotted amount of time.

Since our TST Prep TOEFL Listening Practice has short passages and only 2 questions, we suggest trying to answer both in less than a minute.

After you have mastered answering in less than 60 seconds, try to do it in less than 45 seconds. This will help you sharpen your skills and reduce your anxiety about the clock on test day.

To feel confident, rather than time restricted, it’s important to start training yourself to stay calm and answer questions when under pressure. That’s why you should start out giving yourself plenty of time. Focus on improving your listening skills first, then worry about time.

That was a lot to take in…

I’m sure you’re ready to dive right in and start practicing right now!

What you need to remember is:

These 100 questions are an excerpt from our 500 TOEFL Listening Practice Questions and Answers.

For those of you who are ready to jump in and get started, here is your 100 listening practice questions

Did we miss anything? Any more advice you would like to add about the TOEFL Listening?

Let us know in the space below.

Or see all of our TOEFL articles

This site uses Akismet to reduce spam. Learn how your comment data is processed.

Find out more or adjust your settings.

This website uses cookies so that we can provide you with the best user experience possible. Cookie information is stored in your browser and performs functions such as recognising you when you return to our website and helping our team to understand which sections of the website you find most interesting and useful.

Strictly Necessary Cookie should be enabled at all times so that we can save your preferences for cookie settings.

If you disable this cookie, we will not be able to save your preferences. This means that every time you visit this website you will need to enable or disable cookies again.

This website uses Google Analytics to collect anonymous information such as the number of visitors to the site, and the most popular pages.

Please enable Strictly Necessary Cookies first so that we can save your preferences!